MELT MIGRATION AND MELT-ROCK REACTION IN THE MANTLE

Terrestrial and lunar basalts share a fascinating property: they are not in chemical equilibrium with mantle rock at low pressures. How are melts transported through dozens to hundreds of kilometers of mantle while remaining chemically insulated? To what extent do melts react with ambient mantle beneath mid-ocean ridges? How is melt-rock reaction expressed in basalts and mantle cumulates?

Melt-rock reaction in the lunar mantle

Late lunar magma ocean cumulates have low melting temperatures and high concentrations of heat-producing elements. They are thought to have sank into underlying mantle as Rayleigh-Taylor instabilities. We experimentally explore reactions between magma ocean cumulate melts and lunar interior phases, observing dissolution-precipitation reactions that would produce hybridized lunar mantle sources. These could melt to form mare basalts and provide a means to test dynamic models of early lunar evolution. 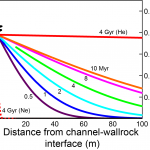 The MORB mantle has distinctly higher 3He/22Ne compared to the OIB source mantle. He diffusion in mantle rock may be orders of magnitude faster than Ne at mantle temperatures. Preferential 3He ingassing around dunite channels will increase the 3He/22Ne of the depleted mantle. Integrating this intuitive theoretical framework into a mixing model, we estimate mantle mixing timescales on the order of 400 million-billions of years. Our model suggests mantle convection is not and could not have been layered for most of geologic time. 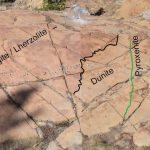 Tabular dunite bodies (“dunite channels”) are thought to represent efficient pathways for melt extraction from the mantle. This study investigates trace element variations across a dunite-harzburgite-lherzolite-plagioclase lherzolite sequence at the Trinity ophiolite, demonstrating that tabular dunites can be sources of melt infiltration rather than melt extraction pathways, opposite the dunite channel paradigm. 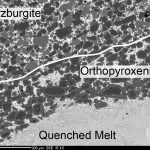 These publications present experimental results that can help field geologists interpret the conditions under which dunites, orthopyroxenites, and other lithologies form by melt-rock reaction in the mantle.

In their earliest stages of evolution, terrestrial planets had deep magma oceans. Cooling magma oceans crystallize a stratified cumulate pile with abrupt lithological variations and more gradual compositional variations. What are the rheologies of mantle minerals and the multiphase aggregates they are composed of? What are the consequences for mantle convection? How does compositional layering shape the long term physical and chemical evolution of planets? 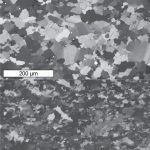 Lunar basalts are Ti-rich, suggesting that ilmenite is an abundant component of the Moon’s mantle. We measured the rheological properties of ilmenite and ilmenite-geikielite solid solutions for the first time in a Griggs deformation apparatus, and developed flow laws that can be implemented in dynamic models. Extrapolating to mantle conditions, we find that ilmenite is >3 orders of magnitude weaker than olivine. Small amounts of ilmenite may significantly weaken the lunar mantle, resulting in the development of dense downwelling Rayleigh-Taylor instabilities during or after magma ocean crystallization. In the extreme case, such instabilities may be hemispheric, explaining asymmetrical properties of the Moon such as the concentration of high-Ti basalts on the nearside.

Viscosity of magma ocean liquids: Implications for differentiation of Mercury and the Moon

A rhenium sphere in a falling sphere viscometry experiment

We measured the viscosity of S-bearing and S-free mercurian magma ocean analogue liquids. The viscosities of these liquids would promote fractional crystallization, suggesting Mercury’s cumulate mantle was dynamically mixed after magma ocean solidification.

Dynamically recrystallized olivine in a harzburgite

TRACE ELEMENT PARTITIONING: CONSTRAINTS ON THE DYNAMIC EVOLUTION OF PLANETARY INTERIORS AND CRUSTS

Partition coefficients are fundamental tools used by petrologists and geochemists to understand igneous processes such as partial melting, melt migration, and element and isotope fractionation. High-pressure, high temperature experiments are conducted in the piston cylinder apparatus to measure partition coefficients under geologically-relevant conditions. 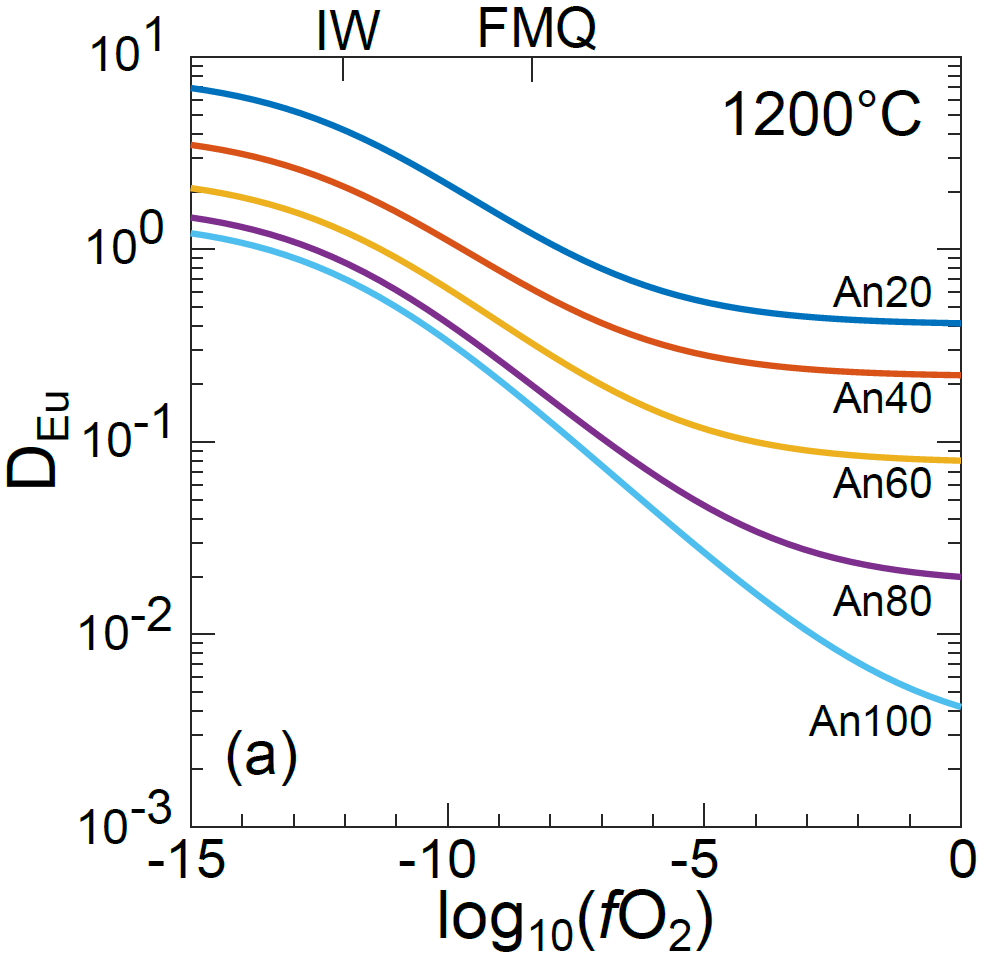 Eu is a multivalent element whose partitioning behavior is strongly dependent on oxygen fugacity (fO2). Using new experimental data and a compilation of published work, we developed a model to predict plagioclase-melt Eu partitioning as a function of fO2. The model can be applied as an oxybarometer, and recovers fO2s for MORBs consistent with determinations by XANES and other methods. 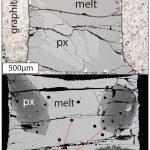 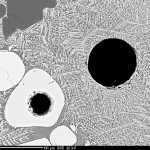 Fe-Ti oxides and Fe-rich clinopyroxenes are phases relevant to evolved planetary interiors. These systems are understudied but important for layered intrusions on Earth, Martian systems, the angrite parent body, and the Moon, and are being newly constrained in experimental work. Lunar magma ocean crystallization models that incorporate insights from the experimental observations suggest REE fractionation during magma ocean crystallization was not efficient enough to produce a residual liquid with REE concentrations similar in slope to the lunar basalts. Dense, late lunar magma ocean cumulates were likely mixed back into the underlying cumulate mantle (by a process called cumulate overturn) and then partially melted to generate the observed trace element patterns.

MAJOR AND TRACE ELEMENT GEOSPEEDOMETRY: NEW INSIGHTS INTO THE THERMAL HISTORIES OF TERRESTRIAL LITHOSPHERE AND ASTEROIDS

Application of the REE-in-two-pyroxene and major element-based thermometers to H, L and LL chondrites, acapulcoites-lodranites, and winonaite-IAB iron meteorites suggests that all five parent bodies were quenched by catastrophic fragmentation at high temperature. Fast cooling rates through high-temperature intervals stand in contrast to cooling rates orders of magnitude slower through lower temperature intervals. The observations can be reconciled if after fragmentation, the parent bodies reaccreted to form slow-cooling rubble pile asteroid. These results demonstrate that catastrophic collisions in the early Solar System were more frequent than previously recognized.

Thermal histories and formation of oceanic lithosphere beneath spreading centers 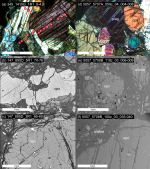 Using a battery of major and trace-element based thermometers and speedometers, we explore the thermal history of oceanic lithosphere (crust and mantle) formed beneath fast-spreading ridges (Hess Deep and the Samail ophiolite). We find the crust-mantle transition zone was quenched from near-peak temperatures, consistent with vigorous hydrothermal cooling and the Sheeted Sills model of oceanic crustal accretion. This work was made possible through participation in the Oman Drilling Project (Dygert, Grambling, Kelemen [PI]). 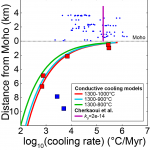 Despite originating from very different tectonic settings, many abyssal and ophiolitic peridotites have similar thermal histories. The Samail ophiolite has a thick crustal section and probably formed beneath a fast spreading center; abyssal peridotites are from fracture zones and amagmatic ridges that lack crust. The similar thermal histories suggest that cooling is independent of spreading rate and the presence or absence of crust. This work investigated spatial variations in cooling rate in the Samail ophiolite mantle section, observing fast cooling rates at the crust-mantle boundary and a systematic decrease in cooling rate with depth moving into the mantle section, consistent with hydrothermal cooling of the crust and conductive cooling of the mantle. 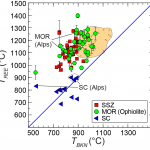 Ophiolites are fragments of oceanic lithosphere obducted onto continental margins. I explored the global temperature systematics among ophiolitic peridotites, finding that those with a strong subduction influence were initially colder and cooled more slowly than peridotites dredged from abyssal basins. Subduction appears to profoundly influence the thermal regime beneath spreading centers.